One of the great things about living in London is the fact glossy Linux magazines are so cheap. These magazines are published in the UK and sell in stores for about 6 Quid. The same magazine in the US is $15+ due to the exchange rate and shipping costs. I buy one every chance I get.

I came across a very interesting article in the December 2014 issue of Linux Magazine titled, “Plane Spotting.” Written by Charly Kuhnast, the one-page article describes how to use a USB DVB-T device to capture airplane traffic and plot it on a Google map. What a cool idea! Ol’ Sopwith decided to purchase a DVB-T and see if it would work on the Raspberry Pi. 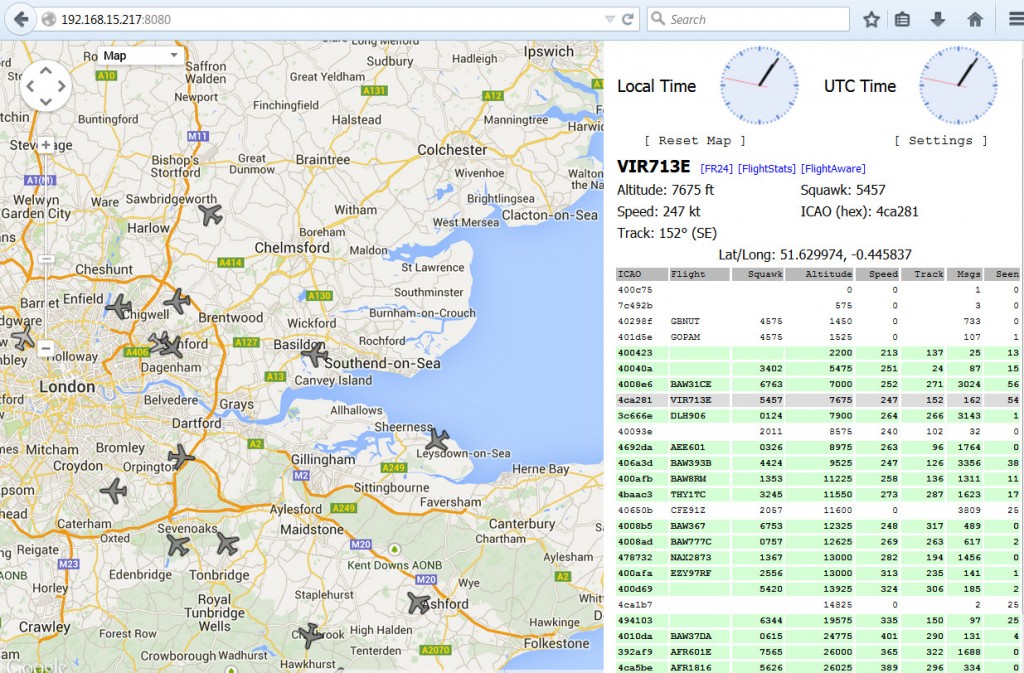 A few Google searches and I determined the use of the DVB-T device is quite popular among Linux users. And, of course, somebody has already figured out how to get the plane spotter app working on a Pi. The most helpful article to me was written by David Taylor titled, “ADS-B dump1090.”

Almost all commercial airplanes around the globe transmit information about themselves on radio frequency 1090 MHz. Known as the Automatic Dependent Surveillance-Broadcast System (ADS-B), an airplanes’ heading, speed, altitude, GPS position, flight number, and squawk ID are repeatedly broadcast. This means anyone with the right radio receiver can receive these signals from airplanes within reach of the receivers antenna.

A properly configured DVB-T device and the dump1090 web service running on a Pi produces a remarkable map of overhead air traffic.

With the amazing advancement of software defined radio (SDR), combined with the dirt cheap availability of USB SDR devices, tracking airplanes and plotting them on a map is a relatively simple process. The trick is to get the right Linux drivers installed and working.

Ol’ Sopwith has written a Raspberry Pi “How-To”  that provides detailed instructions on how to get the plane spotter application up and running on a Pi. If you are in a hurry to get going – use David’s article to determine how to install the required software and configure the system.  If you are a new Raspberry Pi user and prefer clear instructions on how to get things working – this article is for you.

Oh – and one more thing. This project would be a great way to get kids working with a Raspberry Pi. Buy a kid a DVB-T and have some fun.

3 thoughts on “Tracking Airplanes on a Raspberry PI”