Greetings smoke-eaters. It has been a while since ol’ Sopwith published a blog post. That is because I have been working hard on another clock project.

For those of you who do not want to read the rest of this post, here is the datasheet.

A while ago, I came across a very cool Thingiverse project by a French Maker comrade named jeje95. He created a replica of the time-circuit in the Delorean filmed in the classic movie Back to the Future.  Certainly one of the best movies ever produced, with a near cult-like following to this day.

jeje95 also produced a pretty funny video of his creation, that I highly recommend you watch.

I produced one of these clocks, and as all Makers are obligated to do, I decided to make it better. I ditched the Arduino for a Raspberry Pi Zero, added a much better real-time hardware clock (RTC), and a whole lot more.

Here is the list of changes I made to jeje95’s design.

Now, this very cool clock is programmable and hosts a web service. Here is a screen shot of the web service Status page. 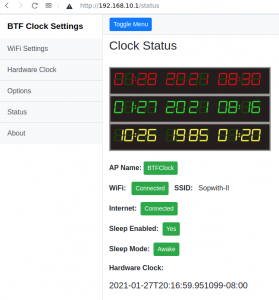 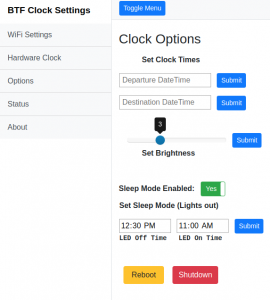 The build and programming are done. I have several working prototypes. I am now finishing up the detailed documentation that shows you how to build one of these very cool gadgets.

If you do build one, I promise you it will attract a lot of attention .